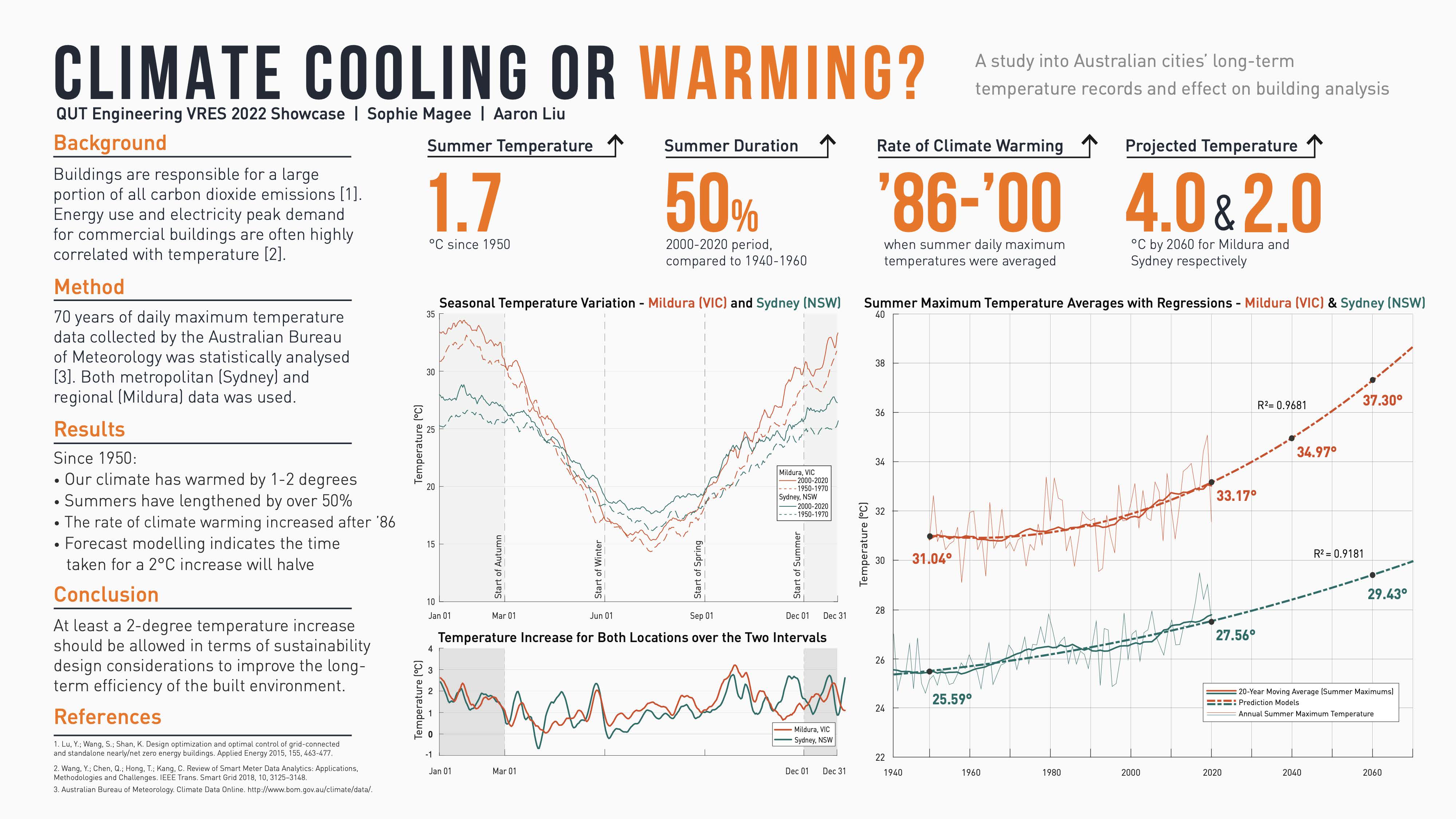 When in use, buildings are responsible for a significant proportion of all carbon dioxide emissions.
Energy use and electricity peak demand for commercial, educational and healthcare buildings are
often highly correlated with temperature. Current recommendations in addressing emissions call for
reduced energy consumption through efficient design. Such approaches, however, fail to address the
dramatic rate at which our climate is changing and consideration for the buildings’ future energy
efficiency. To forecast how temperature may change in the case of ‘business as usual’ for the coming
decades, the long term temperature records of major Australian cities' were studied. Using data
collected by the Australian Bureau of Meteorology (BOM), 70 years of daily maximum temperature
data from two locations (Sydney, NSW and Mildura, VIC) with a similar latitude were analysed and
compared. Statistical analysis highlighted that over this time period, our climate has warmed by 1-2
degrees in both locations. Since 1995, the rate of climate warming has also increased and as such,
summers are becoming more intense. Increasing temperatures are also disturbing seasonal patterns
with data revealing that since 1950, summers have lengthened by over 50%. Forecast modelling also
indicates that the time taken for a 2°C increase is predicted to halve, from 80 years to 40 years. This
research lays the foundation for how building design should be revised to deal with climate change.
At least a 2-degree temperature increase should be allowed in terms of energy and sustainability
design considerations to improve the long-term energy efficiency of the built environment. 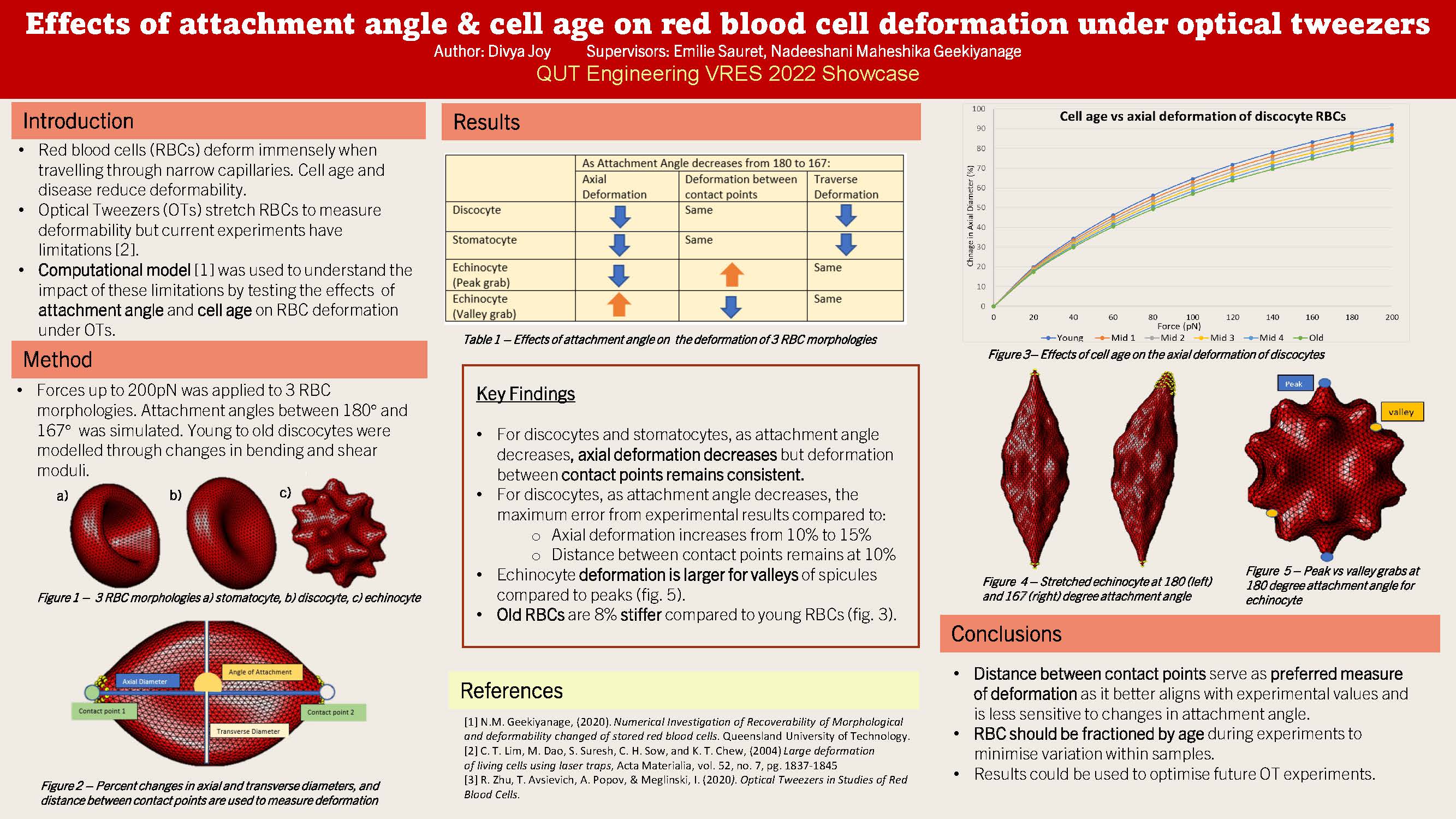 Red Blood Cells (RBCs) undergo large deformations while navigating the human body through narrow passages. RBC deformability reduces due to disease and cell ageing. Since deformability can be used as an indicator of RBC health, it is crucial there exists sufficient means to accurately measure it. Optical tweezers (OTs) stretch RBCs to study their deformability. Current OT protocols have several limitations including the inability to precisely control the point of attachment and the variability of RBC age within tested blood samples. A computational model was utilized to simulate changes to the attachment angle and RBC age within OT experiments to understand their impact on the deformation of stomatocyte, discocyte and echinocyte RBC morphologies. Forces up to 200pN were applied and deformation was measured through percentage changes in the axial and traverse diameters, and distance between contact points. For discocytes and stomatocytes, as the attachment angle decreased, the axial diameter decreased but deformation between contact points remained consistent at 95.4±0.16% and 112.5±0.42% respectively. For discocytes, the maximum error in the axial diameter and distance between contact points compared to the experimental results increased from 10.4% at 180 degrees to 14.8% and 10.5% respectively at 167 degrees. The echinocytes displayed greater sensitivity to changes in attachment angle with higher deformation experienced for contact points located within valleys of spicules compared to peaks. The results suggest that the distance between contact points serve as a preferred measure of deformation as it more closely coincides with experimental values and is less sensitive to changes in attachment angle. Analogous to experimental results, old RBCs exhibited an 8.3% decrease in deformation from young RBCs. This indicates RBCs should be fractioned during experiments to ensure variation within samples is minimised. These results could be used to inform decisions regarding methods to optimise future OT experiments, ultimately helping to quantify the deformation of RBCs more accurately. 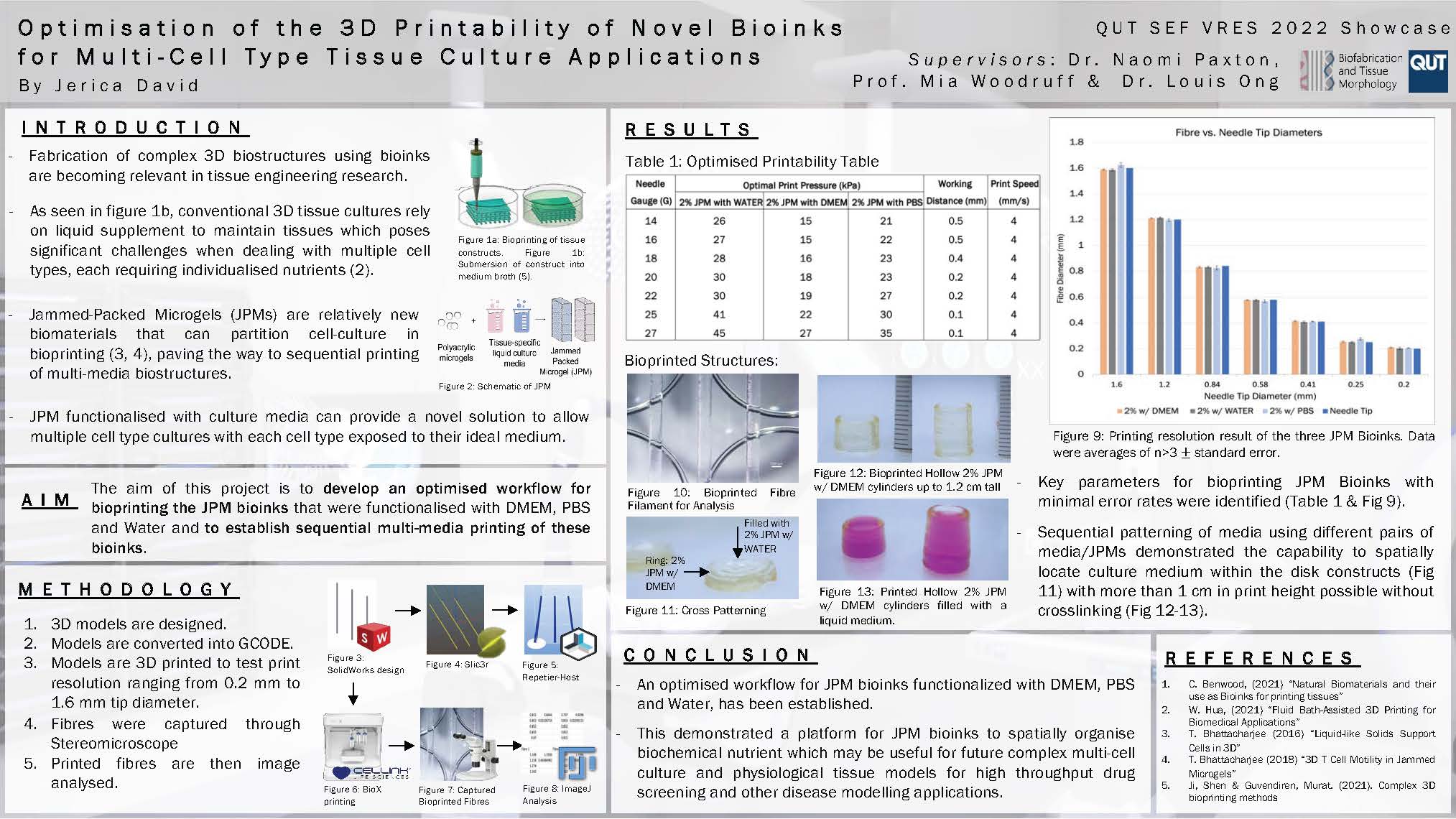 Extrusion-based three-dimensional (3D) bioprinting has become a promising tool in the growing field of biofabrication and tissue engineering for fabricating complex 3D tissue and organ structures. This is through the use of bioinks that either aimed to provide structural support (i.e. PEGDA and cellulose) or to mimic tissue extracellular matrix (ECM) (i.e. GelMa, Matrigel) for tissue culture. However, conventional culture and maintenance of bioprinted tissues still rely on submerging these structures in one common liquid media bath. This technique limits the use of 3D bioprinting in creating tissue structures with multiple cell types especially when different media compositions are needed for maintaining cell functionality. Recent demonstrations of polyacrylate Jammed-packed microgel (JPMs) in cell culture showed promise as a new class of bioinks that can be used to partition cell culture media in bioprinting. The JPM bioinks are shear yielding solids functionalised with culture medium that allow spatial patterning of culture media via bioprinting. Thus, this research project aimed to characterise and develop an optimised workflow for bioprinting JPM bioinks. Through their rheological properties and numerous printing tests, we established an optimised printability table (pressure, working distance, print speed) of a set of JPM bioinks, functionalised with DMEM, PBS and WATER. We achieved bioprinting resolution up to 2.6 μm ± 0.45% error, 1.5 μm ± 0.72% error and 4.6 μm ± 0.38% error for bioinks that were functionalised with DMEM, PBS and WATER respectively. We further demonstrated the patterning capability of these JPM bioinks in spatial patterning through sequentially printing multi-media structures. Success in printing stable heterogenous structures up to 1 cm in height was also established. Overall, we demonstrated a platform for JPM bioinks to spatially organise biochemical nutrient amendable for future complex multi-cell culture and physiological tissue/organ models for high throughput drug screening and disease modelling applications. 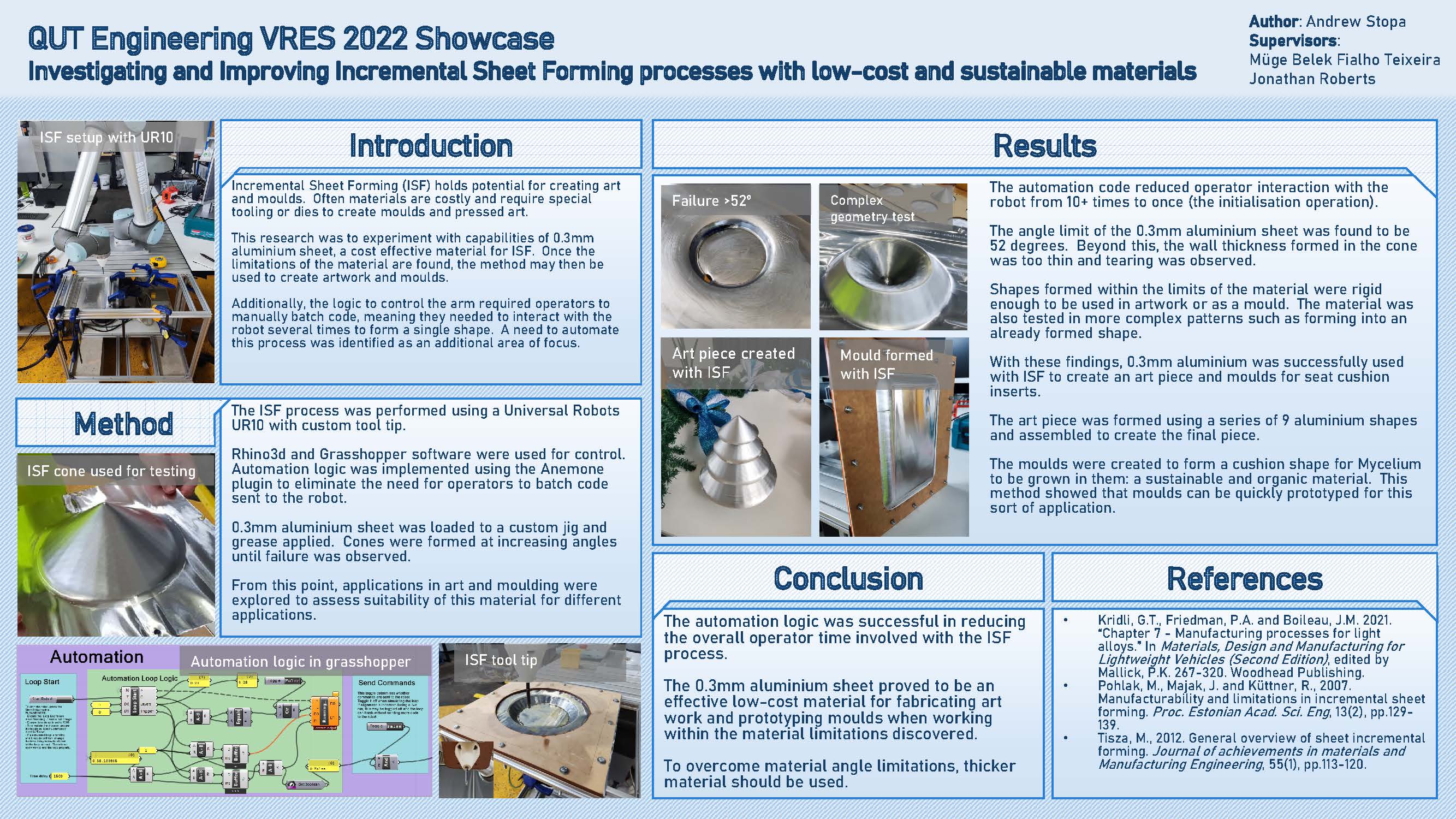 Incremental sheet forming (ISF) is a technique where a flat sheet of material is slowly formed to a shape in incremental layers.  Within the art, architecture and design space, there is great potential to use methods such as ISF to create art installations as well as form moulds to enable other materials to be shaped.  The ability to use a cost-effective material to perform ISF was highly valued, however limited information was available relating to the performance of lower cost materials with ISF, and thus a need to test more affordable materials arose.  Additionally, the ISF process allowed various improvements that could enable faster and more effective work.  The software comprised of a custom Rhino3d and Grasshopper script designed to control a Universal Robots UR10 robotic arm.  The arm was fitted with an ISF tool tip, and several improvements were iteratively made to the code.  These included parametric shape generators to overcome time limitations for design work and code blocks to automate the ISF process.  Cones were formed to test the limits of 0.3mm aluminium sheet at iteratively steeper angles until the material failed.  The results showed that 0.3mm aluminium sheet is suitable for angles not exceeding 52 degrees.  When forming over this, there is insufficient material to form a strong surface, and tearing occurs.  Improvements to the code allowed the system to run autonomously and shapes to be generated quickly.  Using these improvements and working within the material limitations, an art piece and a set of moulds was produced to grow sustainable seat cushions from Mycelium.  The overall ISF process was improved and showed potential in the creation of moulds and art installations.  Based on the limitations experienced, the process may be further improved by streamlining the jig setup process allowing material to be formed faster.  Additionally, to form at a higher angle, it is recommended that thicker material be used.