What is Extended Reality (XR)?

You will likely see this acronym used more and more at QUT to encompass a wide variety of immersive, interactive visual media.

What is Virtual Reality (VR)?

Virtual Reality (also referred to as VR) may be described as an experience whereby a person uses a computer or headset to transport them into an alternative world. VR usually refers to interactive environments, where the viewer can move around and change things in the virtual world, but is sometimes used to describe animated 360 videos which are non-interactive.

What is Augmented Reality (AR)?

Augmented Reality (also referred to as AR) is a technology that adds digital enhancements to the physical environment.

Probably the most well-known example of AR is the game Pokémon Go, where players use a mobile app to find the virtual creatures at specific physical locations.

The level of interactivity possible with AR varies widely. Some augmentations can only be viewed, others will respond to the user's input or gestures.

Similarly, AR content may be designed for use via a standard smartphone, or with more advanced devices like smartglasses or a headset that still allows users to see their physical environment.

What is Mixed Reality (MR)?

Mixed Reality (also referred to as MR) is a technology that uses a combination of both Virtual Reality and Augmented Reality.

Refer to the Encyclopedia of Multimedia and watch the video below to learn more. 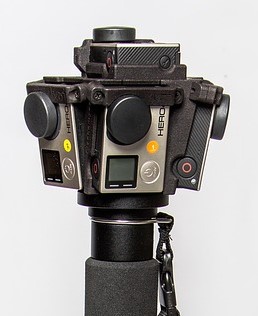 360° videos are videos where the user can turn their head (or viewing window) to see the environment in all directions.

This is usually created by 'stitching' together footage shot from multiple cameras pointing out from a single point, like the 360° camera rig at right. 360° video may also be animated.

Generally 360° video is immersive but not interactive; the user cannot move around the environment, only look around from a fixed point.

360° video can be viewed with any headset for an immersive experience, or on any device screen using click-and-drag to look around.

Below are some immersive 3D 'scans' of the QUT libraries. Click around each scan to move to different points in the library, and click on the coloured dots to view extra information about a particular location or service.

Umbrella XR Icon adapted from an icon made by Freepik from www.flaticon.com